With its established record of innovation, mobility and its long-held pioneering spirit, Renault celebrates the much-heralded return of today’s French Grand Prix in a very special way. 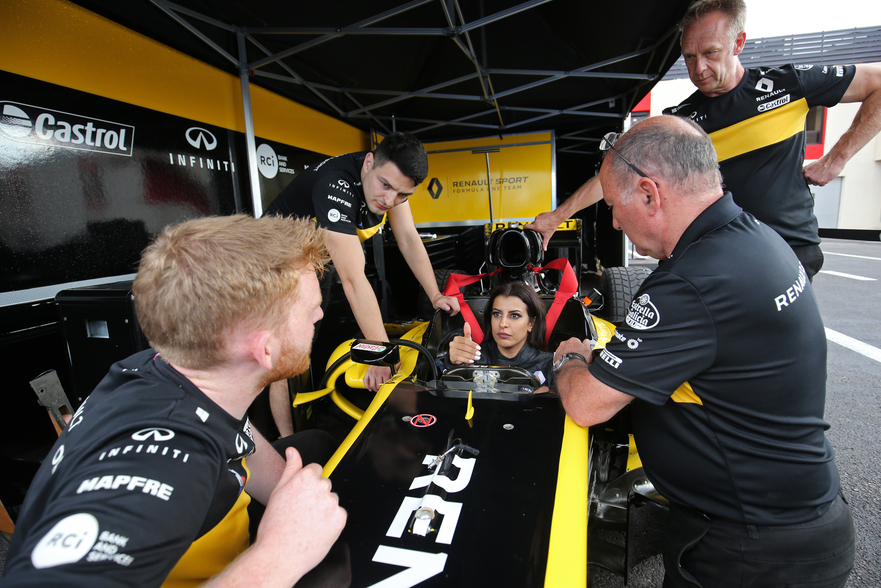 Saudi Arabian Aseel Al-Hamad, the first female member of the Saudi Arabian Motorsport Federation, was given the opportunity to drive a Renault Sport Formula One Team E20 car on the Le Castellet circuit, France, as part of the Renault ‘Passion Parade’ just hours before the start of the first French GP in ten years. It is the very same car former F1 world champion Kimi Raikkonen drove to victory in the 2012 Abu Dhabi Grand Prix.
Renault and F1 are proud to enable Aseel to pursue the passion for motorsport she has cultivated over the years on the same day women are able to drive on the roads of Saudi Arabia.

Aseel got her first experience of Formula 1 power at a Renault training day on 5 June at Le Castellet. Under the expert tutoring of Renault Sport Formula One Team engineers and technicians, Aseel got accustomed to the demanding circuit in a Renault road car before switching to a Formula Renault car and the E20 Formula 1 car in the later part of the day.

Aseel represents her country on the FIA Women in Motorsport Commission, chaired by former World Rally Championship driver and winner Michèle Mouton. Amongst Aseel’s many responsibilities, she is tasked to put in place strategies and policies to promote the education and training of women in motorsport in Saudi Arabia by collaborating on joint projects and participating in international forums and conferences devoted to the place of women in sport.

Aseel Al-Hamad commented: “I have loved racing and motorsport from a very young age and to drive a Formula 1 car goes even beyond my dreams and what I thought was possible. It is a genuine honour to drive the Renault Sport Formula One Team E20 car in front of the crowds at its home Grand Prix in France. I hope doing so on the day when women can drive on the roads in the Kingdom of Saudi Arabia shows what you can do if you have the passion and spirit to dream.”

Jérôme Stoll, President of Renault Sport Racing, commented: “Renault has always embraced pioneers and demonstrated a pioneering spirit. Equally Renault has a long-held passion for motorsport and loves to share it through every type of competition with as many people as possible. We’re pleased to see Aseel’s passion for racing and her enthusiasm for demonstrating the accessibility of motorsport to more people around the world.”

Michèle Mouton, President of the FIA Women in Motorsport Commission: “The FIA Women in Motorsport Commission is dedicated to promoting opportunities across all forms of motor sport activities, but also to promoting equality between male and female counterparts in the wider automotive industry and on the roads. To do so, we work extremely closely with all national sporting federations to improve access to our sport. In the time Aseel has been a member of the Commission, Saudi Arabia’s vision has been very clear and things have developed at a rapid rate. Now, as one of the driving forces behind the Saudi Arabian Motorsport Federation, Aseel will pave the way for women to embrace sports and careers in motor sport. Thank you to Renault for putting together such an innovative opportunity that showcases so many of our principles.”

Groupe Renault has been making cars since 1898. Today it is an international multi-brand group, selling close to 3.2 million vehicles in 127 countries in 2016, with 36 manufacturing sites, 12,700 points of sales and employing more than 120,000 people. To meet the major technological challenges of the future and continue its strategy of profitable growth, the Group is harnessing its international growth and the complementary fit of its five brands, Renault, Dacia and Renault Samsung Motors, Alpine and LADA, together with electric vehicles and the unique Alliance with Nissan. With a new team in Formula 1 and a strong commitment to Formula E, Renault sees motorsport as a vector of innovation and brand awareness.