MG Motor has announced the arrival of the New MG GS 2019 in the Middle East. While the previous generation MG GS was the first SUV to be launched by the British-born car brand onto the global market, the new, improved model now takes a major step forward with its refreshed and practical interior, high levels of equipment and dynamic design.

The New MG GS is available across the region in two trim levels: 2.0T COM and 2.0T LUX AWD. With prices starting from just USD 17,200, depending on market, MG’s SUV offers fun family versatility in a highly affordable package.

The changes are immediately visible from the outside, with the New GS showing off a sportier, yet more aggressive look from the front. The newly designed bumper helps to improve aerodynamics and is nicely complemented by a larger grille and redesigned air intake.

The enhancements continue on the inside thanks to the noticeably higher quality finish, with many hard corners and plastic having been replaced. More than 80 percent of the surfaces are now covered in soft-touch material, an impressive 30 percent more than in the first-generation model. Making it as quiet as it is comfortable, MG has worked hard to reduce cabin noise. 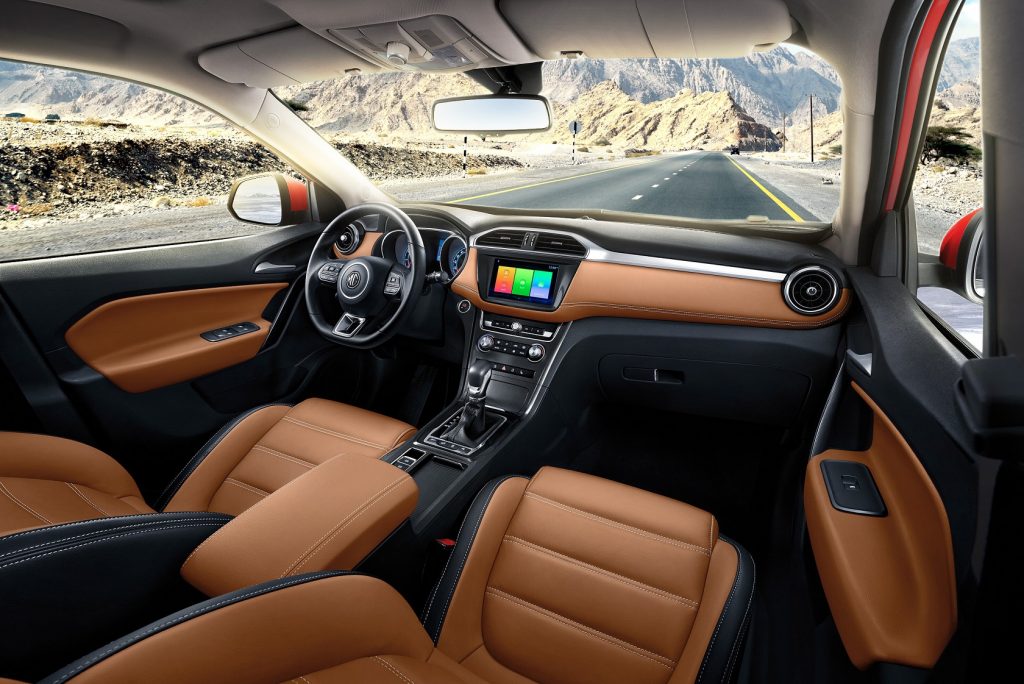 The central console has been completely revamped to offer a more premium finish and greater functionality. It integrates new 360-degree air conditioning vents, while a revised compressor contributes to both enhance the system’s operation and reduce noise. New, sportier seats contribute to the heightened levels of comfort and style within the cabin.

The new console now also features a new 8-inch, quick response, high resolution touch screen, which allows users to manage multilanguage features such as POI Search, with Navigation and an offline GCC map with ease.  The multi-functional steering wheel has also been redesigned with a smaller diameter and three spoke design, offering improved handling and control.

There is ample room in the New MG GS, including 24 different storage spaces. The rear seats can be completely laid flat, expanding the trunk capacity from 434 litres to a whopping 1,336 litres and allowing easy storage of large items. And passengers also benefit from plenty of room in the smart cabin, thanks the new model’s dimensions – it is longer, wider and taller than its key competitors.

Equipped with a 2.0T powerful engine, mated to a smoother 6-speed automatic gearbox with paddleshift gearchange, the New MG GS delivers maximum power of 221hp and maximum torque of 350Nm. It is available with either 2-Wheel Drive or a new All-Wheel Drive, with the latter ensuring a smoother ride by adjusting the torque distribution faster than the previous model. Thanks to an overall improvement in the rigidity of the suspension set-up, the stability of the new model has been improved and cabin noise significantly reduced.

As befitting a family-focused car, safety is a key priority with the New MG GS, which has been awarded 5-star C-NCAP ratings. Standard safety features include ABS, EBD, ESP and six airbags.

Commenting on the New MG GS, Mr. Tom Lee, Managing Director, SAIC Motor Middle East said: “The first-generation model helped to introduce our brand to customers in the Middle East. The New MG GS arrives at a time when we are experiencing significant growth in the number of MG cars being bought across the region. Crafted to high standards of design, technology, comfort and safety, it reinforces the quality of the MG line-up and we are confident will help to boost the growing popularity of the brand.”

Since its acquisition of MG Motor, SAIC MOTOR, as a Global Top 500 company, has opened a new chapter for this British-born brand. The introduction of the second-generation MG GS follows the launch of two SUV models earlier this year, the MG RX5 compact SUV and the MG ZS SUV. Together, these models join the existing MG 360 to complete the brand’s Middle East line-up.

MG is a British born automotive brand established in 1924, known for its historic models, awards and achievements throughout the past 93 years. MG was founded by William Morris and Cecil Kimbers and has the oldest car club in the automotive industry. Best known for its two-seat open sports cars, MG also produced saloons and coupes. Since its acquisition of MG, SAIC MOTOR, as a Global Top 500 company, has opened a new chapter for this British born brand. MG will explore new avenues in the future.