After attending World Travel Market London, it was a great pleasure for us to attend Arabian Travel Market. Arabian Travel Market is a travel and tourism exhibition and event hosted every year in Dubai and is the biggest exhibition related to travel industry in Gulf. It provides information related to hotels, accommodation destinations and aviation. The event was first hosted in 1995 and is one of its kind event in MENA region where industry and government key decision makers participate.
Due to my laziness I was only able to book my hotel on 19th of April, just 6 days before the event starts. First of all, all the hotels close to the venue; World Trade Center were almost full. So I finally settled for a 4-star hotel called Avari Dubai Hotel, situated in the Al Rigga Area.
I started my journey on 24th of April from Fujairah, where I am staying temporarily for a couple of weeks. I wish I could say the check in process was easy however total opposite thing happened. Lets just say that it wasn’t a good choice I made here, staying at this particular the hotel. After dealing with hotel problems, finally I was able to go and visit venue just to get an idea of where things were situated and which stalls to visit first. I also collected my press pass from the registration, and then returned to the hotel. 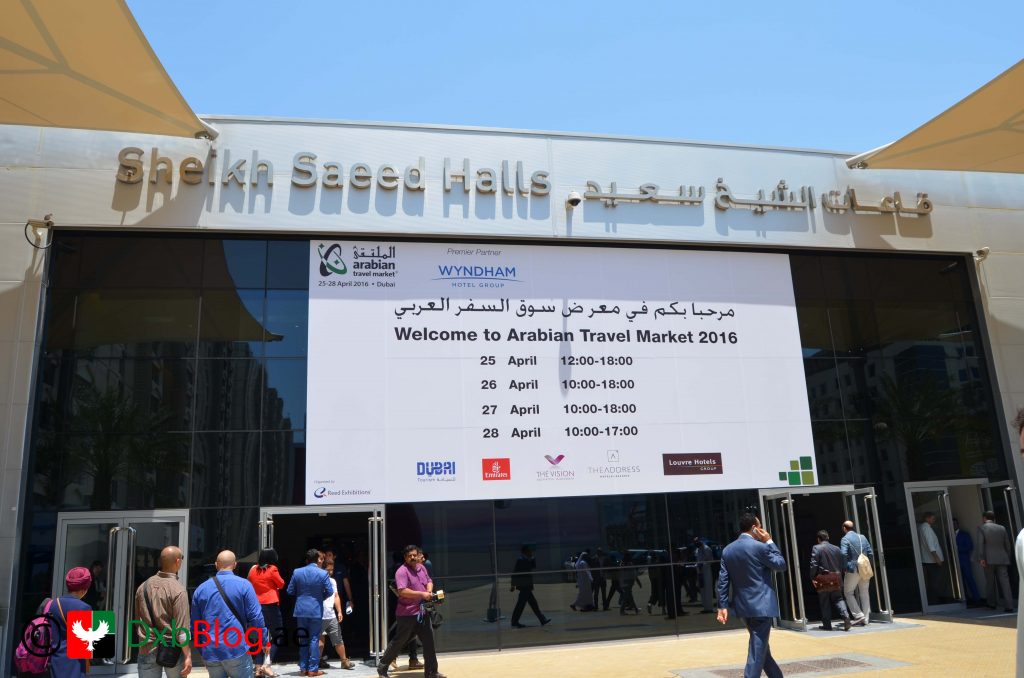 The next 3 days starting from 25th of April till 28th of April were full of activity and networking, where I met many people from around the world. I learnet about different cultures in the world and tried foods which I had never tasted before.

On 25th of April I woke up early and excited about the upcoming day. The very first hall I visited was for Europe and the Africa regions. I visited Germany, United Kingdom, Portugal, Sweden and Turkey stalls and met their Tourism Boards, hoteliers and travel companies and discussed what they had to offer and how we can work together (You can expect more awesome destinations covered on our blog soon) …

After a while I decided to take a short break at the Media Center where arrangements were made for all media people to relax. However, I was so excited about exploring more so I decided to check out the halls where the Asian countries had the had their stalls. I visited Srilanka, Malaysia, Indonesia, Taiwan, Singapore and stalls related to other Asian countries.  From there I decided to head to our very own Middle east and visited stalls related to the companies offering travel and accommodation services in Middle east. One of the biggest sensation of the event was announcement of opening date for The world’s largest indoor theme park (Dubai Parks™ and Resorts) that will open its doors to public on August 15, 2016


Day 1 was very busy, I visited almost all the stalls and throughout the day I was talking to different companies learning about what they have to offer. 70% of people I met during Arabian Travel Market was on day 1.
Day 2 was relatively slow as I woke up late because I spent the night making a list of people and stalls I wanted to meet and work with. So on day two I had a very clear picture of who I wanted to meet and work with, to introduce you guys with more interesting stuff and destinations at Dubai Blog.
On day 2 I had a few meetings with different tourism boards and a few travel companies. I spent a few hours in meetings discussing the future of Dubai Blog and what is coming up on our blog. We got an amazing response from most of the Tourism Boards and Businesses. however, there were a few who had no idea about blogging and how blogs work etc. So I had to explain them about what we do and how our blog can help them.

After attending meetings I decided to try try out different foods and also learn more about different cultures. I really loved the way the Turkish stalls had their local food and delicacies for the visitors to try, and to be honest I spent most of my time in the Turkish regional booths. Due to the simple reason that they had different types of Turkish delights available for people to try.  Apart from Turkey, Georgia had some awesome traditional food available too. Turkish Artists were a huge attraction for all the exhibition visitors.

When it comes to Asia, I was amazed by the South Korean food and drinks, I really loved the South Korean Rice Milk. Also there was an awesome dance performance by artists from Azerbaijan. Azerbaijan,  Armenia and Belarus are the countries I recently added to my wish list, after learning about them from Arabian Travel Market.
In our very own Middle East, the country which attracted me most was Jordon. It was a great pleasure to meet officials from Jordon tourism Board, which got me interested into visiting this country more than ever before and it is now also in my wish list. Egypt was a huge attraction for everyone at the exhibition, due to personal involvement of Egypt’s tourism minister and celebrations at their stalls.
In Asia I was very impressed by South Korea, it would definitely be a country form Asia I would love to visit and explore.  I was also very impressed by Nepal. Taiwan, Malaysia and Indonesia had arranged some amazing cultural dance shows as well.  Malaysia had one of the most active stalls in whole exhibition.
On day 3 I wasn’t there for long, I had a few important meetings and also had a special review scheduled for a Dubai Based tourist service provider, which I will publish in the coming days. However, I made sure I had enough time to try some more South Korean and Turkish food. Also I visited Saudi Arabian stalls and learnt about Tourism In Saudi Arabia and Saudi Arabian tourist destinations and how the government has started to promote its tourist destinations .
To conclude  I would like to say It was a great experience to attend Arabian travel market and I learnet a lot from it, not only about Travel industry over all but also about different cultures, foods and new destinations. It also helped me to create a wish list which I would love to share with you and cover for you guys in future.
Here is my Wish List form The Travel Market so far and the countries I would love to visit.
Asia
– North Korea
-Nepal
Middle East
-Jordon
-Egypt
Europe
-Azerbaijan
-Turkey
-Georgia
-Armenia
-belarus
Article Tags:
Arabian Travel Market · Dubai · dubai city · featured · hotels · travel
Article Categories:
Dubai City Guide