The International Institute for Tolerance part of Mohammed Bin Rashid Al Maktoum Global Initiatives, has announced the launch of a bold initiative, World Tolerance Summit – a two-day mega conference – to be held at the Armani Hotel, Dubai, from November 15 to 16, 2018, to coincide with the International Day of Tolerance on November 16. 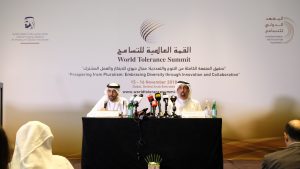 With its theme, “Prospering From Pluralism: Embracing Diversity through Innovation and Collaboration”, the summit will host the biggest gathering of 1000 government leaders, key personalities from the private and public sectors, youth representatives, social leaders, social influencers, and the international diplomatic community in a platform that seeks innovative solutions and to forge fruitful partnerships that will help promote respect for diversity and productive pluralism.

Day one of the summit will be graced by H.H. Sheikh Nahayan Mabarak Al Nahayan, UAE Minister for Tolerance and Chairman of the Board of Trustees of the International Institute for Tolerance. In conveying UAE’s message of love and tolerance to the world, he said, “Tolerance is not simply enduring the existence of opinions, ideas, behaviors or practices that do not concur with your own. It is about recognizing, respecting and embracing diversity. It is about being secure in your own culture and beliefs, so that you respond to what is different with curiosity and compassion rather than with fear and intolerance.  To be tolerant one needs to be concerned genuinely for the welfare of one’s fellow human beings, and to take action based on those concerns.”

The first day of the summit will also have several forums to promote the global culture of tolerance through its high-profile speakers and through the perspectives of world leaders on better governance, and cooperative engagement of stakeholders such as global tolerance advocates, international and local associations, organizations and private corporations.

The summit will also explore the use of social media and digital networking in advocating the significance of tolerance with respect to its societal and economic benefits.

There will also be a strong effort focusing on the youth through the involvement of educational institutions in inculcating the values of tolerance as well as efforts to include women empowerment and their capacity to promote and advocate the value of tolerance.

Day one of the event concludes with the Tolerance Awards that will give recognition to political and business leaders, change-makers, cultural figures, artists, and influencers for their contribution in the advancement of the culture of tolerance, harmony, and peaceful co-existence through their works.

World Tolerance Summit will have on its second day a series of workshops inculcating the values of the late H.H. Sheikh Zayed bin Sultan Al Nahyan. Topics covered include Zayed Values; The Youth of Today, The Leaders of Tomorrow; Women Empowerment in the Development of Country; A Tolerant Country, Happy Society; Understanding and Learning the Science Behind Tolerance; and Using Arts and Sports in Promoting Tolerance.

The Tolerance Library will give access to a wide range of books from all over the world to give readers a deeper perspective on tolerance. WTS will also utilize the digital media via Tolerance Tube to enhance offsite participants with different opinions on and the value of tolerance thru interviews which will be broadcasted on YouTube. The event will also have its own official page on YouTube where people can participate by sending questions addressed to speakers and participants.

WTS Art and Photography Exhibition will be held exclusively during the two-day event. Artists and photographers are welcome to join and showcase their work with Tolerance as their theme. A winner will be selected each for best art and best photograph category and will be given recognition on social media and coverage on traditional media.

World Tolerance Summit is the world’s first of its kind event that tackles tolerance, peace and cultural understanding among mankind. It will be held under the Patronage of His Highness Sheikh Mohammed bin Rashid Al Maktoum, Vice President and Prime Minister of the UAE and Ruler of Dubai. Inspired by the values of the founder of UAE, the late H.H. Sheikh Zayed bin Sultan Al Nahyan, WTS seeks to create a world where every person of any colour or race is treated equally and without prejudice.

H.H. Sheikh Khalifa bin Zayed Al Nahyan, UAE President and Ruler of Abu Dhabi, stated that, “UAE is based on firm and strong values that seek to strengthen its relations on the basis of mutual respect, dialogue, and cooperation, and the abandonment of all forms of terrorism, violence, and intolerance.”

In 2016, the appointments of the Ministers for Happiness, Tolerance, and the Future was made to focus on the capability of the government in ensuring the quality of life in UAE as reflected in all its sectors and tiers in society. This initiative inspired the creation of the International Institute for Tolerance through the patronage of Mohammed bin Rashid Al Maktoum Global Initiatives. IIT acts as a think tank providing solutions to the challenges of extremism and sectarianism through promotion of the culture of tolerance. Since its inception, efforts have been initiated by the Dubai government to ensure UAE will be at the forefront in the advocacy on peace, harmony and tolerance globally as well as locally, and be the finest example to its neighbouring countries.

H.E. Dr. Hamad Al Shaikh Ahmad Al Shaibani, Managing Director of the International Institute for Tolerance and Chairman of the Higher Committee of the World Tolerance Summit, said, “This is the idea we want to share with today’s youth. The past had deprived the younger generation of better opportunities and a happier world. Looking forward to the future, we are focusing on achieving happiness by embracing and practicing tolerance now.”

“The world has seen atrocities. Even in the eyes of the young could be seen the effects of intolerant behaviours. In the spirit of tolerance, we teach not only the world but ourselves, not to discriminate and disrespect. We teach ourselves to see other human beings with respect, so they would do the same to others. “

Mr. Khalifa Mohammed Al Suwaidi, General Coordinator of the World Tolerance Summit, said, “We trust that this government initiative under the International Institute for Tolerance and the Mohammed bin Rashid Al Maktoum Global Initiatives will completely break the barrier of cultural, political, and religious differences and in its place a bridge for better understanding, cooperation, and mutual respect.”

The World Tolerance Summit (WTS) is the biggest gathering of government leaders, key ﬁgures from the public and private sectors, peacekeeping ambassadors and change-makers from around the world who aim to discuss the great importance of tolerance, peace, equality, and to celebrate diversity amongst people from all walks of life, regardless of varying political views, cultural and religious backgrounds.

WTS 2018 will take place in Dubai, a melting pot of many expatriates from around the world, and is held in line with the International Day for Tolerance in November as declared by the United Nations. This 2-day interactive summit brings together international thought leaders, decision-makers and inﬂuencers from the realms of politics, business, religion, culture and the arts for in-depth, thought-provoking discussions on how tolerance brings about real positive change in people’s lives.

Through a wide array of activities, it will delve deep into the ways by which individuals, organisations and nations can be open-minded, understanding and accepting of others’ opinions and beliefs in order to have a peaceful co-existence and cooperate in generating new ideas to build a prosperous and sustainable future.

This limelight event is a reﬂection of the vision of His Highness Sheikh Mohammed bin Rashid Al Maktoum, Vice President and Prime Minister of the UAE and Ruler of Dubai, to convey the UAE’s message of love and tolerance to the world.