The Dubai mall opened on the 4th November 2008, to this day it is being expanded and improved, from the shops to the car parking and general facilities. The Dubai mall is the world’s biggest mall, situated in Dubai, UAE. It was built by Emaar Properties, a public joint stock company based in the UAE. With its 12.1 million square feet of retail, entertainment and leisure, the Dubai mall has something for everyone. From the Fashion avenue, to the shoe Level district, The stretch of designer shops and rich jewelry, to the common known shops like new look, splash, and river island, there is surely no lack of variety on the retail side with the 1,200 shops and many more upcoming. The many developers have also spoilt you for choice in leisure options; from the underwater zoo aquarium (which sold thousands of tickets in the first 5 days of the mall opening, so you can imagine how many billions and trillions it has attracted over the 6 years of operation), to the beautiful dancing Dubai fountain show, the 76,000 square feet SEGA games complex, the Olympic style ice rink which can host up to 2,000 skaters, to the 22 screen Reel Cinemas and access to “At the Top” to the world’s tallest building. 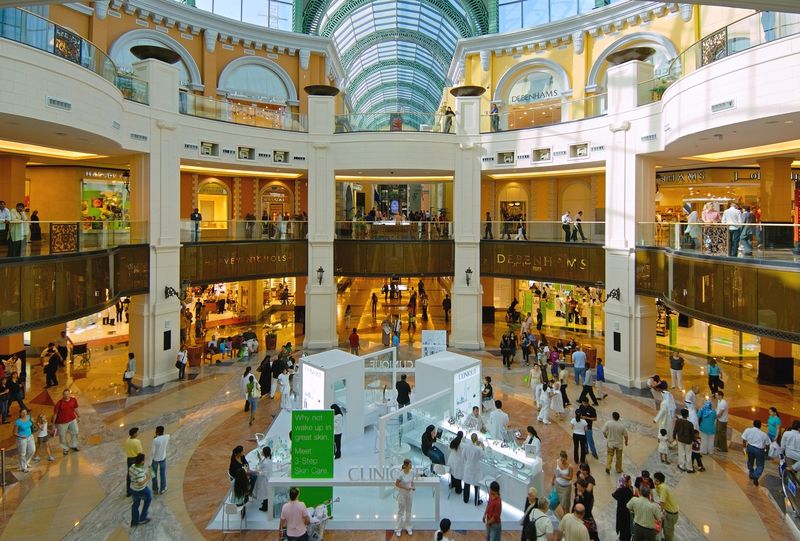 So where is this magnificent mall I hear you all ask? The Dubai mall is situated on the famous Sheikh Zayed road, which stretches to the boarder of Dubai/Abu Dhabi, following the metro line down.  If you are not driving, you can access the mall by metro, as the newly built metro link connects the Burj Khalifa/Dubai Mall station to the mall, or you can hop on one the many RTA buses running from the gold Souq in Deira, or the Ghubaiba bus station.
From the moment you enter the Dubai Mall the hustle and bustle of the millions and trillions of people is an atmosphere that will blow you away. From the walkway of culture, taste, the smell of sweetcorn and the convince of booking your tour packages and exchanging money to the electronics shops shunning their deals left right and center when you enter from the metro station on the upper level, to the beautiful French macaroon shops, little coffee shops and the glorious designer shops, Fashion avenue and the rich jewelry shops on the lower ground level. There is not taste that you won’t find, from the extensive range of fast food and quick food in the food court to the exquisite range of restaurants, from different cultures and parts of the world. Let your taste buds free, your minds wander, your heart roam and don’t be stingy on the bucks, because if anywhere, the dubai mall is where you want to spend it.
So let’s explore the wonders in ab it more detail…
The Dancing fountain show occurs every half an hour starting from 6pm, the blend of music and a dancing water show is beautiful and refreshing in the mist of the humidity the country upholds. It is always a nice way to begin your evening, or perhaps watch it from the many restaurant that surround it, from above or below, it is truly breath taking.
The mall also hosts the world’s largest indoor Gold Souk, with over 200 of the finest jewelers. As a contrast to this in 2009 it was said to have opened the world’s largest candy store, for all you sweet tooth bearers! There is a sweet surprise awaiting you!
Going across the bridge by that allures your attention to the fountain show, one can find the Souq Al Bahar, a portrayal of culture and tradition in the middle east, the Arabic style retail and dining area is translated to be “The Market of the Sailor”, by which it lives it name by being surrounded by water. Although there ae not any alcohol licensed restaurants in the main mall, you will find a few in the Souq. Although many holiday makers come for the purpose of the hot weather, many locals prefer to dine indoors, but that does not mean it is not permissible to dine outside. With everything from live musical entertainment, to the Arabic custom of the hookah (or shisha), or simply the stunning view, one can dine outside in both locations with lots of pleasure.
The Dubai Mall cannot be summed up in mere words, the experience is beyond anything one could ever say, it’s something worth seeing in person!
Article Tags:
Dubai · dubai city · dubai mall · dubai travel · holidays · jbr
Article Categories:
Dubai City Guide