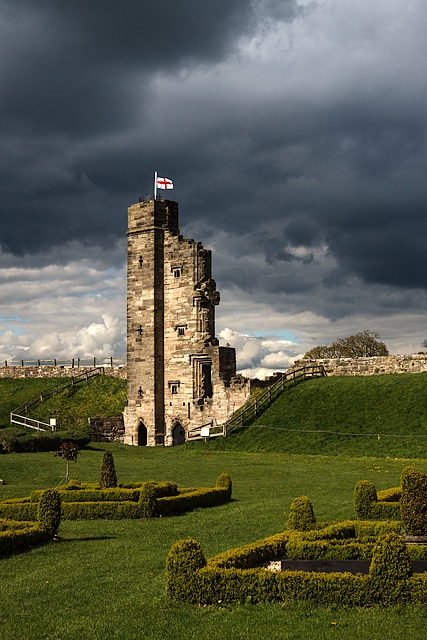 Ever thought if walls could speak, how different or detailed their tale we know would be? Perched high on a wooded ridge, dominating over the wandering course of River Dove, this magnificently ruinous Castle has us convinced on the previous thought. Nevertheless, it was pretty fun exploring Tutbury’s turbulent yet haunting history, and we can’t wait to share it with you, so let’s dive in!

Owing to recent excavations, historians claim that Tutbury has been a livable site among the English for thousands of bygone years. No doubt, it was its natural defensive site that first attracted the Saxon kings of Mercia and then the Normans. It also does not hurt that the Castle has commanding views of the plains of River Dove and the surrounding countryside, stretching to as far as the scenic Derbyshire hills. A complete treat for people of yore.

Early records show that the first structure originated in 1068 after the Normans’ decisive win over the Crown, imprinting an unmistakable mark of their rule over the Midlands. Initially, William the Conqueror granted the ‘Totesberie’ Castle (as known then) and its developing village to Henry d’Avranches. The new owner laid out the castle foundations following the traditional ‘motte and bailey’ layout. But in 1071, Henry ascended to Earl of Chester, and William awarded the lands extending from Leicestershire to Derbyshire (including Tutbury and Burton on Trent) to one of his credible knights and a powerful Norman magnate, Henry de Ferres.

It was during this time that Tutbury became the third-largest borough in Staffordshire, and Henry left no stones unturned in his capacity in ensuring that the town achieved the importance it deserved. He fortified the location as the family’s headquarters; around 1080, de Ferres and his wife, Bertha, endowed a Benedictine Priory to Tutbury, along with two manor houses. By the early 12th century, the wooden building topping the militant motte was exchanged for a better-consolidated stone tower, adding a touch of grandeur and security to the Castle.

In 1138, Robert, third son of Henry de Ferres, was rewarded with the Earldom of Derby for his support in repelling against an attack launched by the King of Scots, David I. Then, in 1153, a civil war broke out between Empress Matilda and King Stephen. Matilda’s son, Henry of Anjou, besieged Tutbury and later went on to become King Henry II. In the early 1170s, the Ferres family was in an open conflict with the Crown for supporting King Henry II’s son, Henry the Young King, in his rebellion of usurping his father.

Although the Ferres family settled the issue with the King, unfortunately, the entire castle was razed following a siege placed under the command of Prince of Debeubarth in 1175-76; only the foundations of a late 12th century erected chapel remain from that time. What we see today are the ruins dating back to mostly the 13th and 14th centuries, when the castle underwent reconstruction. Out of which also, only the outer structure of the south tower and its winding staircase has survived.

Even more tragic events followed the uprising of the rebellious Barons against their King in the Second Barons’ War of 1264-67. The Ferreses found themselves, once again, on the wrong side of fate when Lord Edward (future King Edward I) led the Royal forces for his father, Henry III, and attacked Tutbury. Ultimately defeating the Barons’ leader, Simon de Montfort, at the Battle of Evesham, the King seized all the possessions of Robert Ferres. The estates were then granted to his second son, Edmund Crouchback – to be Earl of Lancaster.

In the following years, the Castle underwent numerous upgrades to repair the slights made during the war.  The main gateway was installed by Thomas, Edmund’s son and next Earl of Lancaster, along with changes in the curtain wall in 1313-14. Thomas was the leader of the resistance initiated against his cousin and then King, Edward II. The civil war brought Edward to Tutbury from Coventry, where he had hoped to intercept Thomas’ forces. With some turn of luck and quick thinking, Edward defeated the surprised Thomas at the Battle of Burton Bridge on 10 March 1322, and the Earl eventually paid for high treason with execution at his own Pontefract castle. However, his brother, Henry, was allowed to succeed him to his estates in 1326.

In 1351, the rank of Earldom was dignified to Dukedom, with Henry’s son, Henry of Grosmont, becoming the first Duke of Lancaster. In the following years, his daughter, Blanche of Lancaster, tied a knot with John of Gaunt, who was the third surviving son of Edward III and, of course, the next Duke of Lancaster. Since the Castle was in desperate need of repairs, Gaunt had the restoring works started as soon as he shifted to Tutbury. On his passing in 1399, his eldest son, Henry of Bolingbroke, rose to the position and successfully deposed his cousin, Richard II, and became the first King of England from House Lancaster. The Tutbury Castle subsequently became the property of the Crown and since then has been in the custody of the Royal family.

In 1832, around 100,000 to 300,000 coins were recovered from the bed of River Dove by a few workmen. They first stumbled upon the treasure during their construction work of a nearby cotton mill, and from there, the news spread like wildfire. According to literature, the coins were the supposed payment from Thomas of Lancaster to his Scottish allies since he was expecting their reinforcements, but was never delivered. Thereafter, he must have hidden the barrels while fleeing or, concerning one speculation, his treasurer lost it and was later discovered by the monks who then hid it for safekeeping till the King returned. Nonetheless, it took 500 years to shovel out those coins.

The unearthed gold and silver coins date back to the 13th and 14th centuries, many of which are from the reigns of Henry III, Edward I, and Edward II of England, Alexander III, John Balliol, and Robert the Bruce of Scotland. It is the most massive hoard ever seen in British history, and today, the British Museum and the Stoke on Trent Museum in Henley owns part of the discovered coinage.

In the year 1569, Tutbury welcomed its most unenthusiastic guest, Mary Queen of Scots, who previously escaped her first prison at Lochleven, only to be defeated and captured again and this time for nearly twenty years. Almost immediately on arriving at the Castle, she began complaining about the unpleasantly cold, damp, and draughty carpentry of the place, describing in her writings that it caused the wind to whistle through her chamber. Shortly, George Talbot, Earl of Shrewsbury, was assigned the task of her jailer and retained his position for the next fourteen years. During these years, she passed her time reading, writing, and embroidering with Bess of Hardwicke, George’s wife.

In June 1569, Mary was moved to Wingfield Manor and later to other Talbot’s properties at Sheffield and Chatsworth but spent most of that year and next at Tutbury. However, she returned to Tutbury for a much definite stay on 14 January 1585 under a new jailer, Sir Ralph Sadler. He was kind and had allowed Mary to have a billiard table and hunt in the park. Much to her disappointment, Queen Elizabeth I received the word of these relaxations, and she replaced the guardian with a Puritan, Sir Amyas Paulet, and thus began Mary’s days of strictest confinement in April of 1585. She was no longer allowed to take walks in the privy garden or give alms to the poor of the town.

On Christmas Eve of the same year, Mary was relocated to Chartley Castle, and, following the discovery of her plot against the Queen in the Babbington Conspiracy, they had to move her to Fotheringay in Northamptonshire. Here, on the 8th of February 1587, at age 44, Mary Queen of Scots was executed with three blows to her neck.

Since the early 2000s, Tutbury has turned a new leaf, welcoming hundreds of visitors all year round. It is quite befitting in an ironic sense that the ruins still look the same as it did after the siege in the Civil War. From Tudor gardens and tearooms to King’s Bedroom, the Castle is every bit spectacular. And most importantly, the owner re-enacts the historical figures, which, believe us, brings out the best in these tours.