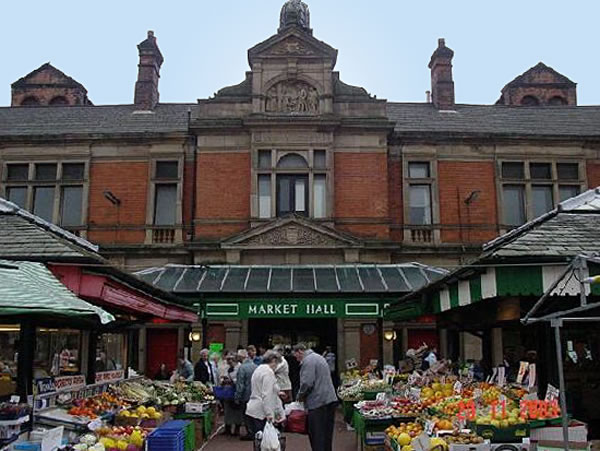 Beyond a doubt, one of Burton upon Trent’s biggest tourist attractions is its bustling Market Hall. Opening its doors for the first time in 1883, it occupies the exact location as the original fifteenth-century hall. Conveniently located off of High Street in the town center with a decently priced car parking and a quick drive from the A38 down the main Burton Road and Lichfield Street, the location could not be more ideal.

The youngest and the most favorite son of Henry II and an inheritor of the crown from his elder brother, Richard the Lionheart, the unpopular King John is best remembered for signing the charter of liberties, Magna Carta: one of the history’s most famous documents in June 1215. He also granted a charter to the borough of Burton on the 12th of April 1200, allowing the town to hold its weekly Thursday market. With it, permission to celebrate a three-day festival, which still lives on today, from the eve of St Modwen’s day till the day after (28-30th October), was also given to the then Abbot, William Melbourne. His son, Henry III, later confirmed the grant of the market place and fairs.

From then, it took nearly two centuries to build a proper structured Market House during the abbotship of Thomas Feylde (1427-93). Primitively, the market place was kind of an asymmetrical rectangle extending from the twin-towered abbey church and had a complex of roughly five tenements in the center of its western side, better called as the swine market in the early 16th century. The building served its purpose till 1772, after which it was demolished and heedlessly replaced with a new Town Hall on the orders of Lord Paget. The Town Hall establishment was too taken down, only to have the Market Hall put back in its place in 1883.

In May 1880, a competition took place to decide on the architectural designs of the new market hall, a typical conventional way to award the project. However, a smarter idea was one of its inclusive terms, which added the condition of a carving of an ornamental design dedicated to the history of Burton over the west entrance. On the winning of the competition by Dixon and Moxon of Barnsley, the tenders were voted upon and passed. The literature records the Fire Brigade, Markets, and Fairs Committee approving of a model of the main panel on 23rd of May 1883. Soon they set the wheels in motion, and the market hall was ready to be officially opened by the end of the same year.

One prominent feature of this Renaissance styled market hall is the spectacular stone carving decorating the main market entrance. The art portrays a scene of a kneeling abbot, accompanied by two other monks, humbly accepting the scroll of liberties from King John, who is flanked by his two knights behind him and a bishop carrying his crozier.

The inscription below the cornice on an approximately 1-meter horizontal band reads: KING JOHN BRINGING CHARTER GRANTING A FAIR AND WEEKLY MARKET AT BURTON AND CONFIRMING THE RIGHTS AND LIBERTIES OF THE ABBOT AND MONKS OF BURTON. It is bounded on the right side by the coat of arms of King John and the left with those of Burton Abbey’s. The leading sculptor, John Roddis, delayed the completion of the stone carving because he felt that he deserved an add-on of £60 for the Stanton stone he worked upon proved to be more challenging than the decided Coxbench stone.

The market area is packed with similar art and stone works and other sculptural reliefs, which includes a Neoclassic triangular pediment, set above the doorway. It bears the coat of arms, crest, motto, and a shield, partitioned into upper and lower sections. The latter illustrates six wavy lines representing the Rivers Trent and Dove. The upper portion of the shield depicts two symbolic fleurs-de-lys and a displayed eagle with extended legs and wings in the center taken from the Paget family arms. The crest is of an ornamented crown, suggestive of the civic government. The motto states ‘HONOR ALIT ARTES.’

There is another skillful craftsmanship in the form of a bull’s head, fashioned with a ring through its nose, by the Butcher’s entrance of the market. An engraved blue plaque adds more to its historical importance. Likewise, one can find many smaller adorning garlands and fruit selling figures scattered around the premises.

Dissolving to the present day, the Market Hall has become a valuable asset to Burton. With a smell of warm pastries in the air, the indoor market is a perfect haven to take shelter during the rainy days. From homemade vegan treats to vintage clothes and fresh seafood, Burton’s Market Hall is a place of complete delight that is sure to brighten up anyone’s day. The market has to offer something for everyone.

Previously, the pop-up stalls used to occupy the whole of the interior, including the upstairs balcony that was accessible by the stairs at the far end of the hall. For a certain period, the balcony was vacated and would go unnoticed by the visitors.

Recently in 2013, the Market Hall went through a massive revamp, costing about £1.5 million. The main idea behind the refurbishing and uplifting the Victorian mood of the building was to draw in more market traders to fill the vacant parts of the hall. However, it was quite a controversial decision by the East Staffordshire Borough Council since the closure of the market for 18-months led to minor clashes with stallholders, who complained of disturbances in their businesses.

According to the architects, preserving the authenticity of the space was their top priority. Since most of the original parts of the building had made use of high-quality materials, it was easy to retain the tilling in the walls of the permanent stalls. They had to redesign the staircase linking the upper balcony with the market hall area.  The other side staircases also got replaced, and the two lifts got installed to increase the accessibility to the main space.

Well, all’s well that ends well. These days, the Market Hall is home to independent fashion accessories and gift shops. Under the magnificent glass ceilings, you’ll find vendors selling high-grade leatherwear and sports goods. Sore feet and tired from all the shopping, you can pop into any bakery or café, and chill out. Our personal favorite is VEGIN’OUT’s classic carrot cake with custard buttercream frosting.

Today, the council makes use of the area by converting the stalls into entertainment spaces for special events held throughout the year, including the craft days, family fun weekends, boxing shows, and the most loved, Gin and Rum festival. We bet you do not want to miss out on these events on your next visit.