SAIC Motor has achieved its highest ever position on the Fortune 500  list, ranking first among Chinese auto companies. Appearing on the prestigious list for a 14th consecutive year, SAIC Motor has been ranked No. 36 by US-based Fortune magazine, five places higher than the previous year. The accolade follows the brand achieving a sales revenue of 128.819 billion US Dollars and car sales of 6.93 million units in the 2017 financial year, a 6.8 percent increase on the previous year. 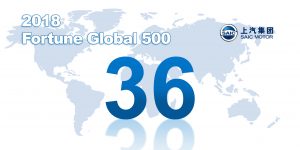 SAIC Motor achieves highest ever ranking on the Fortune 500 list

Already well established globally, SAIC Motor has sales networks in 13 core countries and region including ASEAN, Middle East, Africa, Europe and Oceania, as well as an innovation centre in Silicon Valley. As the largest auto manufacturer in China, the brand ranked 7 th among all global automakers on the Fortune 500 List, ahead of brands such as BMW and Hyundai.

SAIC Motor is at the forefront of global technological innovation, delivering significant achievements
in a number of areas related to the development of the cars of the future, such as new-energy cars,
connected vehicles and automated driving. In the first half of 2018, SAIC Motor’s sales volume of
new-energy vehicles amounted to 57,000 units with a year-on-year growth rate of 275 percent a
growth rate more than twice the market average.

Commenting on the news, Tom Lee, Middle East Managing Director, said: “The Middle East is one of
the most important international markets for SAIC Motor. Our record-breaking ranking on this year’s
Fortune 500 List reflects the brand’s efforts in effectively serving SAIC Motor’s valued customers
whilst creating a competitive international brand image. In the future, SAIC Motor will continue to
develop new-energy cars, connected vehicles and automated driving to enhance our global and
Middle East footprint as we continue to focus on being a world leader in innovation.’’ 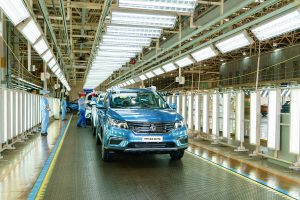 The MG RX5 on SAIC Motor’s production line in China

As part of this global focus, SAIC Motor has been expanding its presence in the Middle East since
opening its headquarters in Dubai’s Jebel Ali Free Zone in November 2015. Recently, the brand has
introduced a fresh line up of vehicles to the region under the MG Motor brand, including the MG
RX5, MG ZS and MG GS 2019. MG Motor has also expanded its distribution network with the appointment of new partners in the UAE and KSA within the last 12 months.